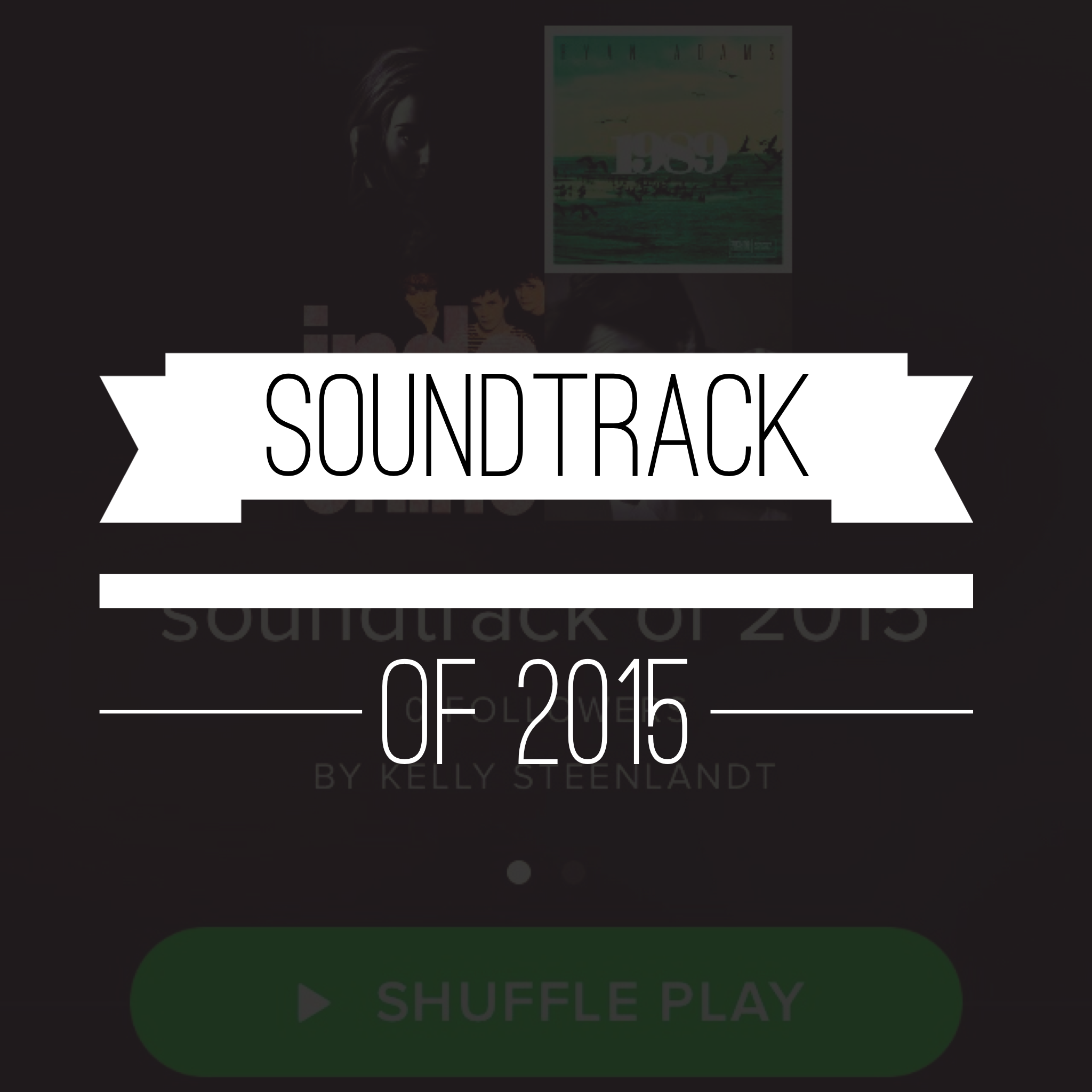 I like me a challenge or two, so it will come as no surprise that I’m participating in the newest Instagram challenge this month: #decemberreflections.
Today’s topic is the Soundtrack of 2015. While I browsed through my Spotify playlists I created my own Soundtrack of 2015 compilation. I thought it would be nice to include it here, together with a couple of paragraphs on each song.

Hello – Adele
I’m not alone in this one, right? My guess is that about half the population on Earth is actually a self-proclaimed Adele fan. I was so happy she finally decided to release some new material this year, although I’m a bit more fond of her previous albums. Sadly, we decided not to attend her concerts in 2016, which I’m sure will be the event of the year!

Bad Blood – Ryan Adams
I have to admit it: I’m a huge Taylor Swift fan. I’m bit bummed she left Belgium out of her 1989 World Tour (please, Taylor, come back), but I’ll forgive her (I’m sure we can be besties, right, Taylor?).
Anyway, I’ve been into Ryan Adams for quite some time as well. When I heard he would be releasing his version of Swift’s hit album 1989 I couldn’t wait to get my hands on it and it did not disappoint. I guess it just proves how good of an album 1989 was in the first place, otherwise it would not have been possible to turn it into this beautiful record.

Tes Yeux Noirs – Indochine
I’m one of those people who always has Shazam in her proximity. I cannot believe how I survived without this app for so long. Now, I can fall madly in love with a song I’ve heard just once, somewhere on tv or on the radio. Most of the time, the song also relates to a particular event in my life. I heard this song on the way back from our summer vacation in l’Alpe-d’Huez. I’ve always been very fond of the French language and then this song came along while we were cruising back home after the most wonderful and relaxing summer holiday. Bliss.

I Can Change – Brandon Flowers
I’m a huge fan of The Killers and their lead singer Brandon Flowers. Honestly, I’m still so bummed over the fact that I passed up on the opportunity to attend his gig in Brussels earlier this year.
Better luck next year?

Fourth of July – Sufjan Stevens
Earlier this year I really got into Sufjan Stevens after reading a tweet of my bestie Stijn. It ended up with us attending his concert in Brussels back in September. One of the best shows of the year, that’s for sure.
The album also holds many memories for me. The album was inspired by the 2012 death of Stevens’ mother and around the time I started listening to it, Evelien passed away. While the feeling is overall sad, I cannot help but finding beauty in it as well.

The Mother We Share – CHVRCHES
Another band I discovered this year was CHVRCHES. This is my favourite song of them. Love this one!

Friday Night Lights Theme – Snuffy Walden
I know I’m a bit late to the party but earlier this year I started watching Friday Night Lights (finally, I know!). The show quickly became one of my all-time favourites, even becoming a possible tie with Beverly Hills 90210.
Team Riggins, but of course.

Save A Prayer – Eagles Of Death Metal
I guess no words needed for this one.

The Electric Co. – U2
I will forever cherish the beautiful time I spent at the two U2 concerts back in October. It allowed me to tune into their older material again and I’ve been listening to this particular song over and over again.

People Have The Power – Patti Smith
I first got introduced to this song at the U2 concerts (I know, shame on me) and I immediately fell in love with its vibe. Instant classic!

The Less I Know The Better – Tame Impala
Tame Impala hit the radio waves earlier this year as part of the Summer of 2015 playlist on my favourite Belgian radio station Radio 1. Little did I know that they would score a big hit nowadays with this song. One of my favourite discoveries of the past year.

Come As You Are – Nirvana
I used to be a big Nirvana fan when I was a teenager so when Montage of Heck was released last Spring, I couldn’t wait to see it. I’m not much of a documentary girl, but this one blew my mind. If you haven’t got a chance to see it yet, make sure you do.

Stranglehold – Ted Nugent
My favourite tv series this past year (well, second place behind FNL, sorry!) was Bevergem, which is a Belgian tv series spoken entirely in the dialect I spoke when I was a kid (and now still do). Our regional speech pattern is something many people make fun of so it was quite refreshing to see a series dedicated to it. The story that was part of it was just brilliant and I adored every single minute of this show on my tv.
Now, every good show comes with an even better soundtrack and Bevergem did not disappoint here.
Seriously, if I were to have a different career, I would love to be some sort of music supervisor for the CW or ABC networks, selecting tunes for upcoming episodes of my favourite shows. One can dream, right?

For those of you who want to listen in on my Soundtrack of 2015:

Does music play a big part in your life and what songs define 2015 for you?